Mr. Udovenko began learning about piano tuning and repairs at Riga’s (Latvia) factory of musical instruments in 1983 under the guidance of Master technicians G. Dalmanis and I. Galenieks. He also went on to a complete pipe organ tuner training at Riga’s State Philharmonic, (Latvia).

At the same time in 1984, Mr. Udovenko graduated with a Masters Degree in Mechanical Engineering at Odessa State Technological Institute.

Besides his dedicated work with pianos and pipe organs, Mr. Udovenko received his Bachelor of Music Arts degree in Wind Orchestra conducting at Abakan State Music College in Siberia in 1988.

With his engineering expertise and a breadth of music skills gained in different ﬁelds, these have signiﬁcantly contributed to his understanding of the piano. In 1989 he completed technical training at the Moscow State P. I. Tchaikovsky Conservatory, led by Steinway & Sons factory, Hamburg (Germany). 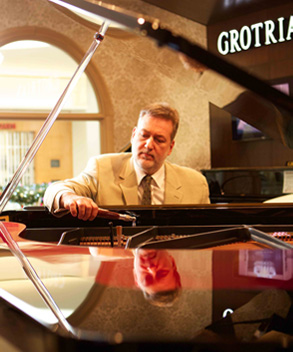